View All at Instruct

The Biophysics platform at Integrated Structural Biology Grenoble (ISBG) and Institut de Biologie Structurale (IBS), Grenoble offers one of the largest ensemble of state-of-the-art technic & methods for in vitro characterising the intrinsic properties of biological macromolecules in solution, biomolecular interactions and their assemblages.

The Biacore technology allows real-time detection and monitoring of biomolecular binding events. One of the interacting molecules (the ligand) is bound to the biosensor surface (sensor chip), whereas the other is delivered to the surface in a continuous buffer flow through a microfluidic system. Binding to the immobilized molecule is followed by surface plasmon resonance, which detects mass changes at the sensor surface. Recording SPR signal variation as a function of time (sensorgram) for several analyte concentrations allows to determine the association and dissociation rate constants, and to derive the affinity constant. This technology also allows to measure the concentration of functional molecules and the interaction stoichiometry.

Studying macromolecules (and in particular proteins) by circular dichroism (CD) allows to obtain information about their folding. CD spectroscopy measures differences in the absorption of left-handed polarized light versus right-handed polarized light which arise due to structural asymmetry. For proteins, far UV (180-260 nm) and near UV (250-330 nm) circular dichroism measurements give insight respectively into their secondary structure content and their tertiary organization. Thermal stability of folded molecules can be determined by performing temperature gradient to the sample. Similarly, conformational stability of a molecule and structural changes induced by complex formation can be checked at constant temperature by adding step by step chemical denaturation agents.

Dynamic Light Scattering (DLS) is used to measure particle size and molecule size. This technique measures the diffusion of particles moving under Brownian motion, and converts this to size and a size distribution using the Stokes-Einstein relationship.

Fluorescence spectroscopy is a powerful technique that allows analysis at equilibrium or in real time, changes in the environment of intrinsic or extrinsic fluorescent probes (including tryptophan for protein, synthetic fluorophores).The fuorimeter is equipped with several modules to measure the fluorescence steady state in normal or polarized light (fluorescence anisotropy measurements).

The FortéBio BLI technology allows real-time detection and monitoring of biomolecular binding events. One of the interacting molecules (the ligand) is bound to the biosensor surface, whereas the other (the analyse) is delivered to the surface by dipping the functionnalized surface in analyse solutions. Binding to the immobilized molecule is followed by light interferometry, which detects changes of the bimolecular layer thickness. Recording BLI signal variation as a function of time (sensorgram) for several analyte concentrations allows to determine the association and dissociation rate constants, and to derive the affinity constant. This technology also allows to measure the concentration of functional molecules.

Isothermal Titration Calorimetry (iTC) is a physical technique used to determine the thermodynamic parameters of interactions in solution, without any sample labelling or immobilisation. It measures the affinity of binding partners in their native states. It works by directly measuring the heat released or absorbed during a biomolecular binding event.It can be used to study any interactions, from small ligands to larger macromolecules but also to analyse the interaction between two macromolecules.  By measuring heat transfer during binding, iTC allows the direct determination of binding stoichiometry (n), of binding constants (Kd), and variations of enthalpy (ΔH) and entropy (ΔS). Analyses at several temperatures give access to the variation of heat capacity (ΔCp) linked to the formation of a molecular complex. This provides a complete thermodynamic profile of the molecular interaction. The enthalpy (ΔH) and the entropy (ΔS) contain information about the type of interaction and reflect the nature of the forces driving the binding.

Mass Photometry is a label free single-molecule technique based on optical detection of the scattering signal generated by a single particle at glass-water interface. The mass photometer can measure molecular masses of individual native particles in solution, ranging from 40 kDa to 5MDa and thereby determine mass distributions of macromolecules in solution. In relatively quick measurements, users can determine the mass distribution of a sample to assess sample stability, complex formation and multimerization states. Only low sample amounts of samples are required, usually several microliters at a concentration of 1 µM are sufficient. This method is particularly useful to assess sample homogeneity and quality control prior to biochemical experiments or structural analysis.

Microscale Thermophoresis is a method to quantify biomolecular interactions. It measures the motion of molecules along microscopic temperature gradients and detects changes in their hydration shell, charge or size. When performing a MST experiment, a microscopic temperature gradient is induced by an IR laser, and the movement of molecules is detected and quantified using either covalently attached dyes, fluorescent fusion proteins or intrinsic tryptophan fluorescence. By combining the fluorescence detection with thermophoresis, MST provides a way to measure molecular interactions.

Multi-angle Light Scattering (MALS) allows the characterisation of the molecular mass of particles in solution by detecting how they scatter light. The term "multi-angle" refers to the detection of scattered light at different discrete angles. The combination of size-exclusion chromatography (SEC), coupled  with  on-line  static  laser  light  scattering,  refractive  index  (RI),  and  ultraviolet  (UV) detection allow the simultaneous determination of the molar mass and asses the polydispersity of each component of a sample. Regardless of conformation or non-ideal SEC column interactions, MALS provides accurate molecular weight determination of proteins, oligomers and characterise macromolecular stoichiometry of complexes, including for complex systems associating protein-detergent, protein-RNA, protein-polymer. It is a method often appropriated to study interactions of membrane protein and glycosylated proteins.

PAOL couples an exclusion chromatography and different detectors, static and dynamic light scattering, refractive index and absorbance. PAOL combines the separation of macromolecules and their characterization. See the technical and scientist description. It allows: - Quantifying the homogeneity of the preparations. - Determining the stoichiometry of complexes, including for complex systems associating protein-detergent, protein-RNA, protein-polymer. It is a method often appropriated for studying interactions of membrane protein and/or glycosylated proteins.

The platform is organised of several technical plateaus managed by scientists, engineers and technicians with technical and methodological know how and expertise, in order to help any scientist to tackle variety of biological questions and projects including stability, homogeneity, oligomeric states, stoichiometry, specificity, affinity, kinetics, and thermodynamics.

The platform and its instruments are available for the entire scientific Instruct-ERIC community.

For more details on plateaus, instruments, experts and how to apply & access, please visit the platform webpage. 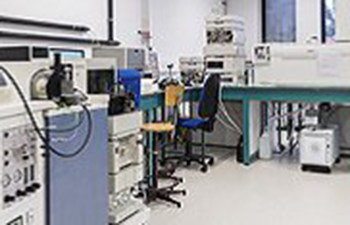