Mapping the movements of the mitochondrial ADP/ATP carrier

Mitochondria generate energy for the body by making ATP (adenine triphosphate) from ADP (adenine diphosphate). For this to happen, cells must shuttle ADP from the cell cytoplasm into the mitochondria across the mitochondrial membranes. Similarly, once the ATP has been made it needs to be taken to other parts of the cell for use in chemical reactions. There is just one problem – ATP and ADP cannot travel directly through the inner mitochondrial membrane. Instead, specific proteins called mitochondrial ADP/ATP carriers transport both molecules across the membrane. “Every day, this carrier transports our own body weight in ADP and ATP” says Jonathan Ruprecht and colleagues in their paper investigating the precise molecular mechanisms of the carrier.

Carrier molecules, like the mitochondrial ADP/ATP carrier, change shape in order to transport their cargo from one side of the membrane to the other. For the ADP/ATP carrier, size matters. Compared to ADP and ATP, the membrane protein is small and therefore has to change shape significantly to allow passage from one side to another. The carrier changes between two states: the cytoplasmic-open state (for which the structure was already known) and the matrix-open state. To understand how the carrier changes between states, researchers first solved the 3D structure of the matrix-open state.

Studying the 3D structure of the carrier requires stable carrier molecules arranged into a 3D crystal. The carrier was trapped in the matrix-open state by using a compound called bongkrekic acid, a lethal toxin that binds to the protein and stops it from working. The researchers were then able to create crystals of the matrix-open state with the help of a nanobody - the part of an antibody that binds to another molecule - prepared at Instruct Centre BE. X-ray diffraction data were then collected to reveal the 3D structure of the carrier molecule, using the intense microfocus X-ray beamlines at Diamond Light Source (an Instruct research site) in the UK and the European Synchrotron Radiation Facility in France. The nanobodies and X-ray beamlines were essential to the success of this work. 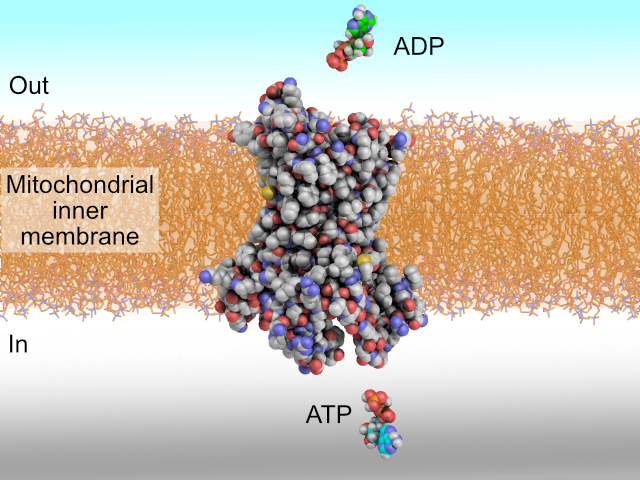 Figure. The mitochondrial ADP/ATP carrier protein, shown in the mitochondrial inner membrane, carries out the vital task of transporting ADP into mitochondria and ATP out. Scientists at the MRC-MBU in Cambridge, UK, have determined how these proteins carry out this remarkable task.

The structure of the matrix-open state shows that the carrier is incredibly dynamic, using six moving elements to transport ADP or ATP across the membrane in a carefully orchestrated and unique way. The ADP/ATP carrier is just one member of a large family of related transport proteins that bring different compounds in and out of mitochondria. The team suggests that mitochondrial carriers for other molecules are likely to use the same mechanism.

Click here for more information about nanobodies at Instruct.